The Global Youth Aviation / Drone Career Expo is a free digital event for youth from around the globe to learn about career pathways to Aviation, Aerospace, and Commercial Drone Careers in various countries and to inspire the next generation of the aerospace workforce.  Meet and hear from leading Aviation/Aerospace industry experts from around the globe who are dedicated to advancing the future of aviation, drones and technology.  They will help scholars ages 8-18 understand how to pursue various aviation/drone technology careers. Connect with Peers and Industry Leaders.

The GYADCE digital event is hosted by Aviation Center of Excellence (Powered by Kids Drone Zone) a 501C-3 Nonprofit dedicated to exposing scholars around the globe to:

Hey Kids A Neighborhood Pizza Robot Coming To You Soon!

Domino’s is rolling out a robot car delivery service to select customers in Houston. For those who opt in, their pies will arrive in a fully autonomous vehicle made by Nuro.

Here’s how it works: Customers in the Woodland Heights neighborhood of Houston can choose robot delivery and receive texts with updates on the car’s location and a numerical code that can be used to retrieve the order. Once the car arrives, the customer enters the number on the bot’s touchscreen, and the car doors open up to serve the food.
Nuro’s robot car was the first completely autonomous, human-free on-road delivery vehicle to receive regulatory approval from the US Department of Transportation last year, Domino’s said. 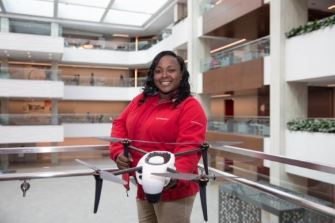